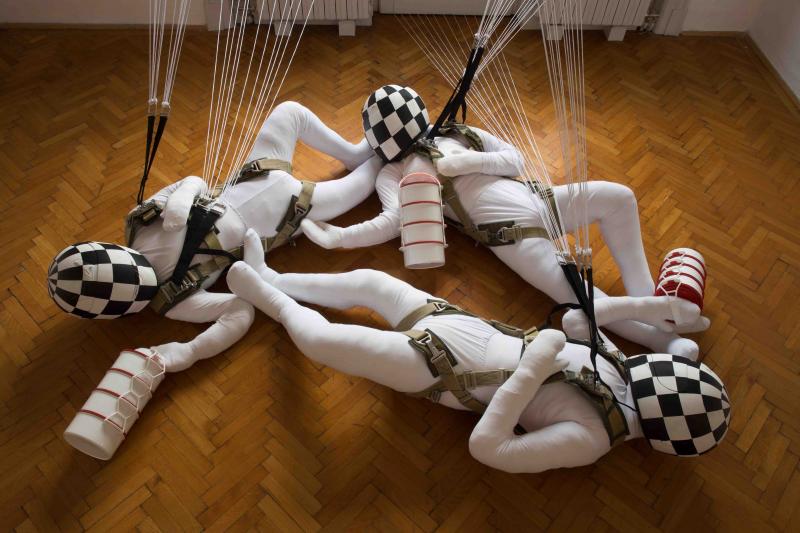 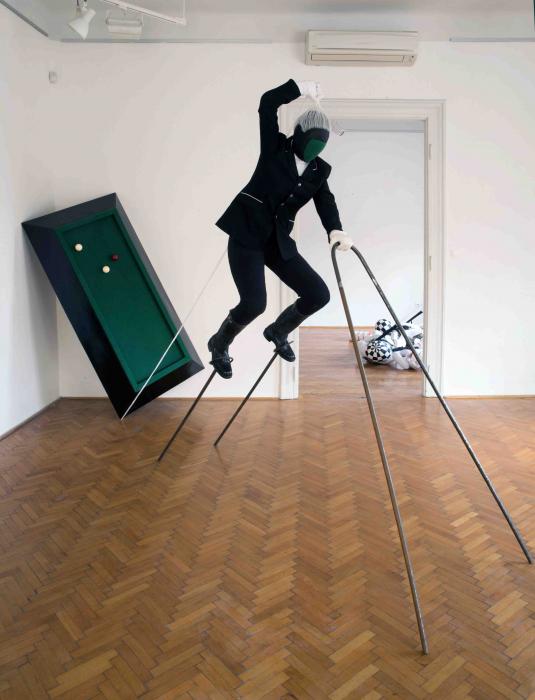 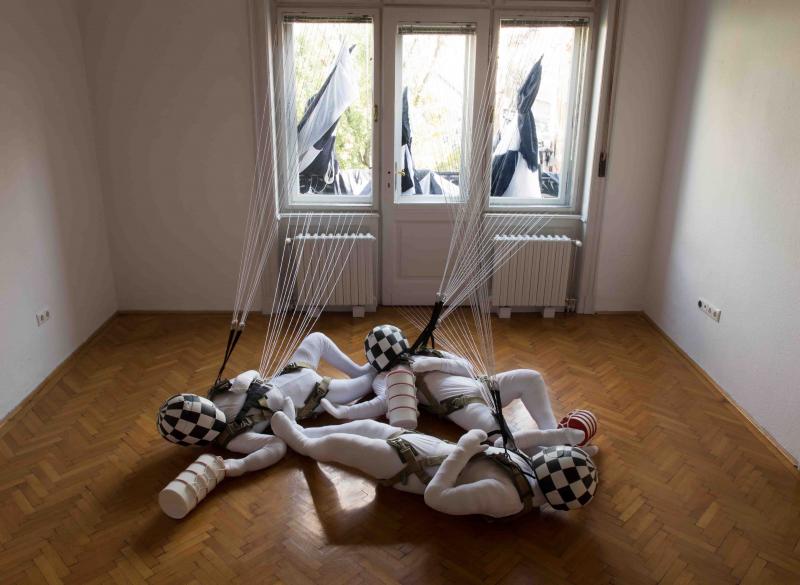 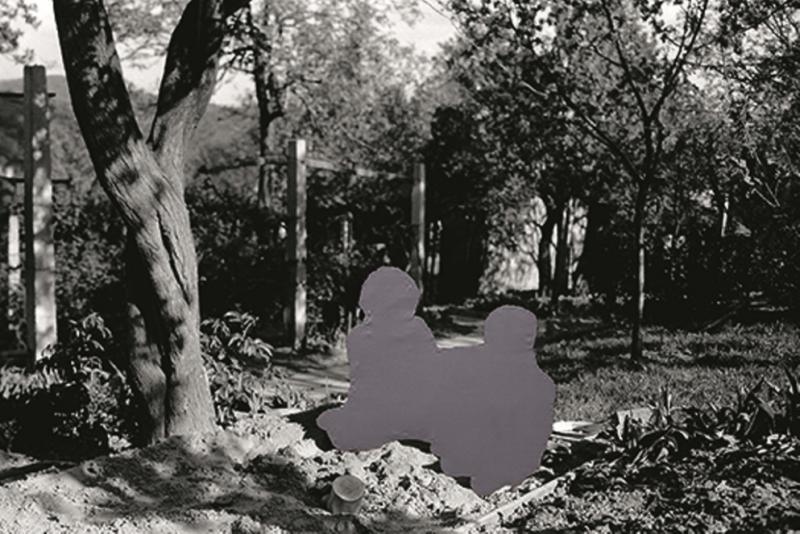 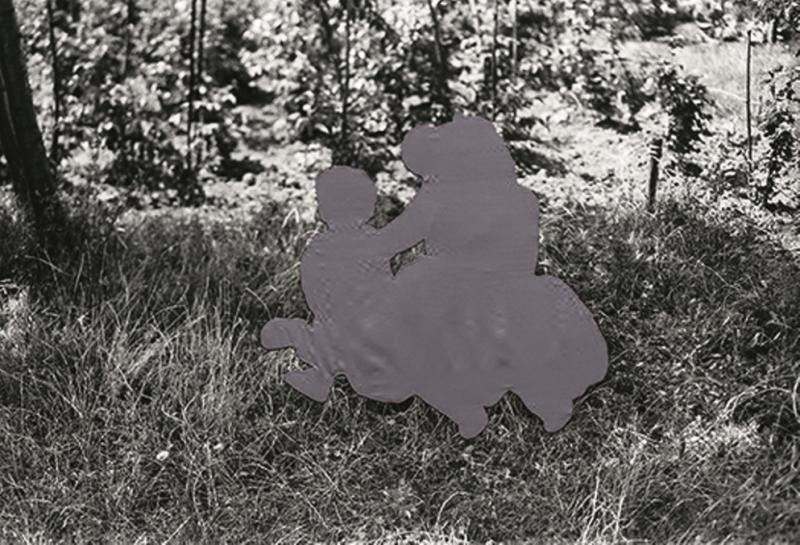 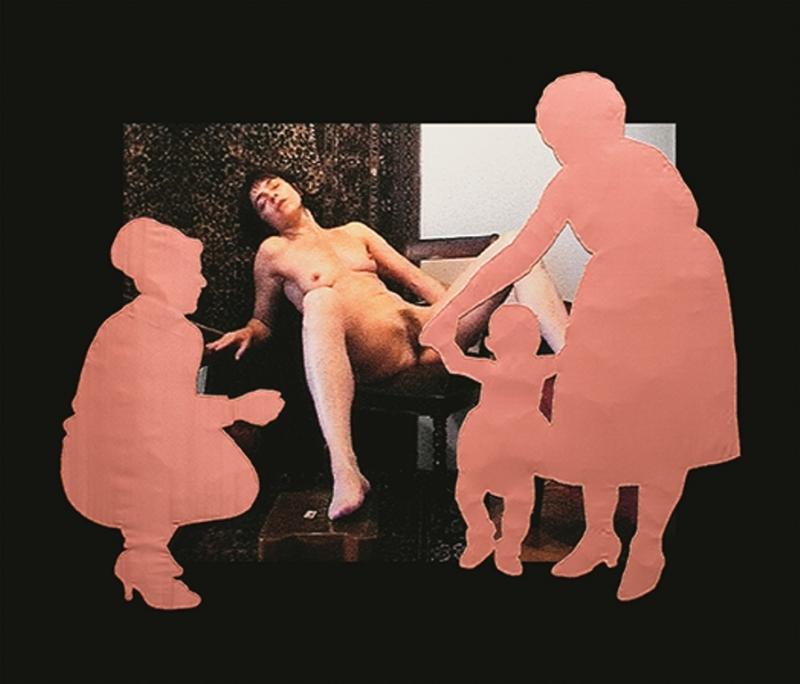 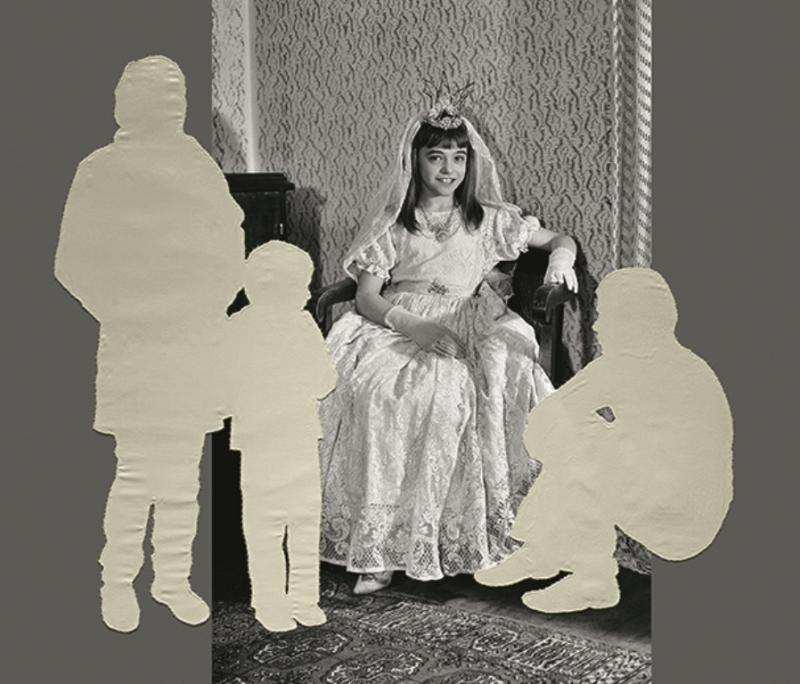 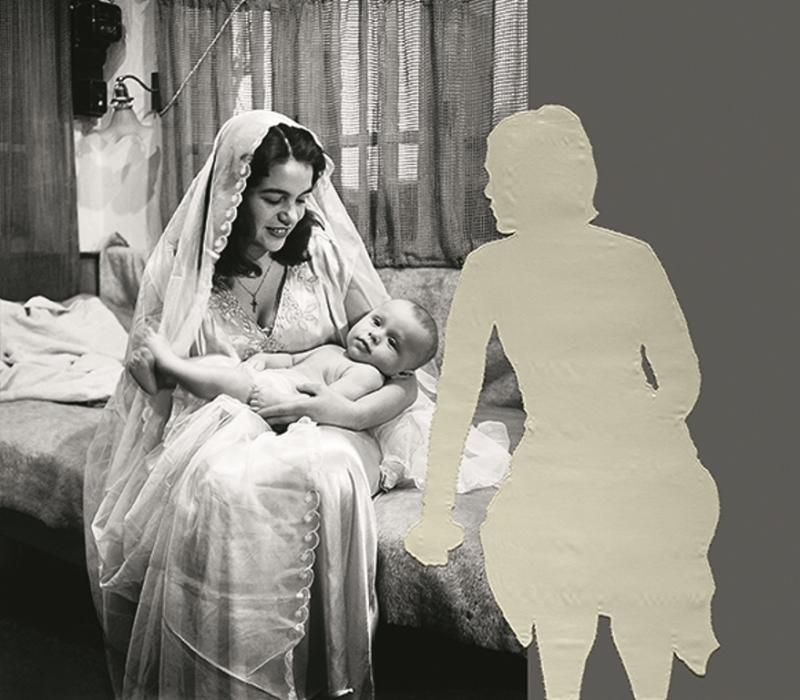 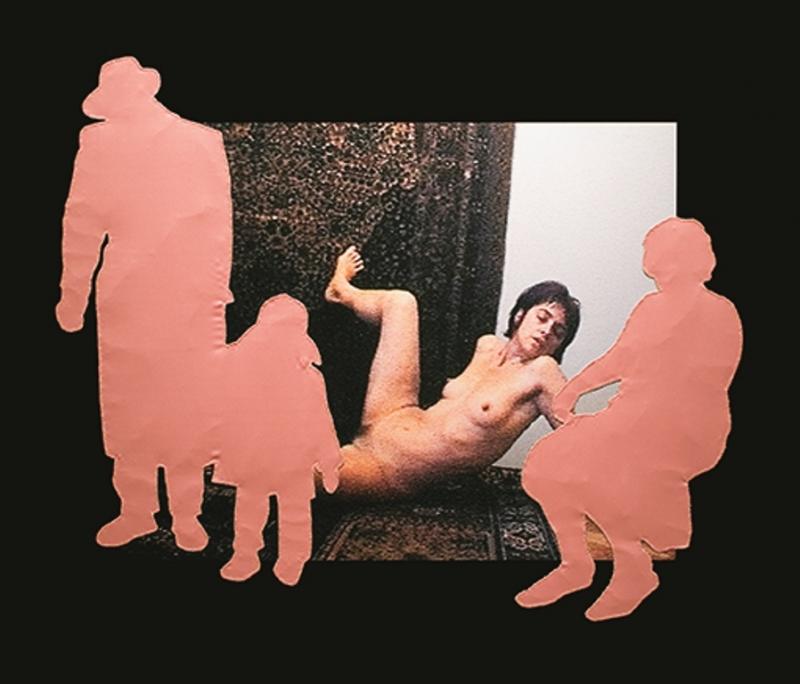 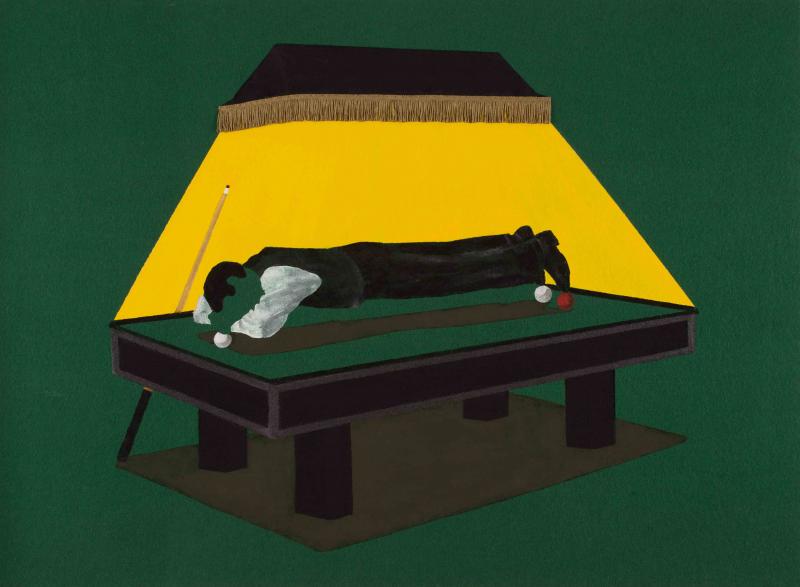 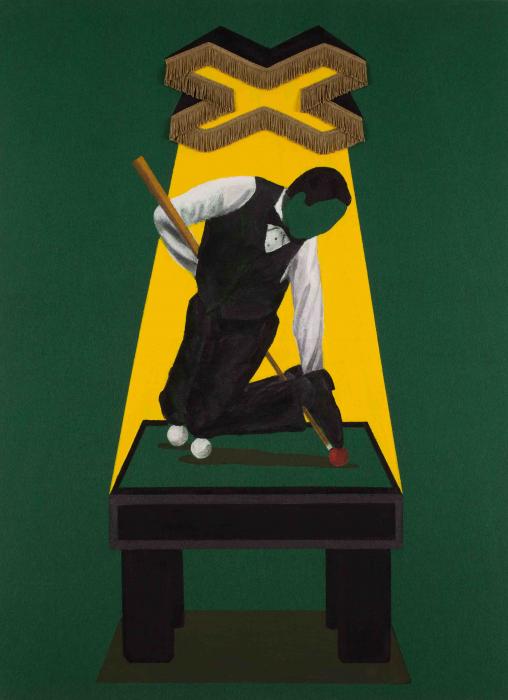 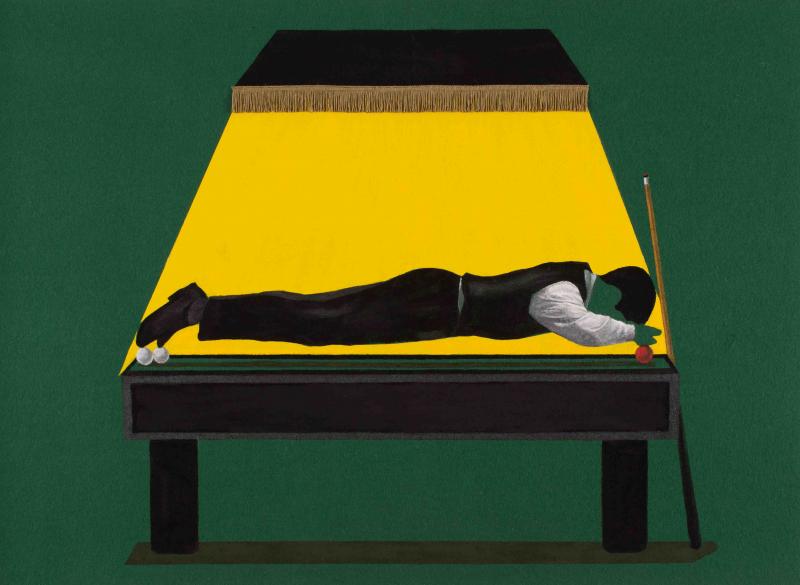 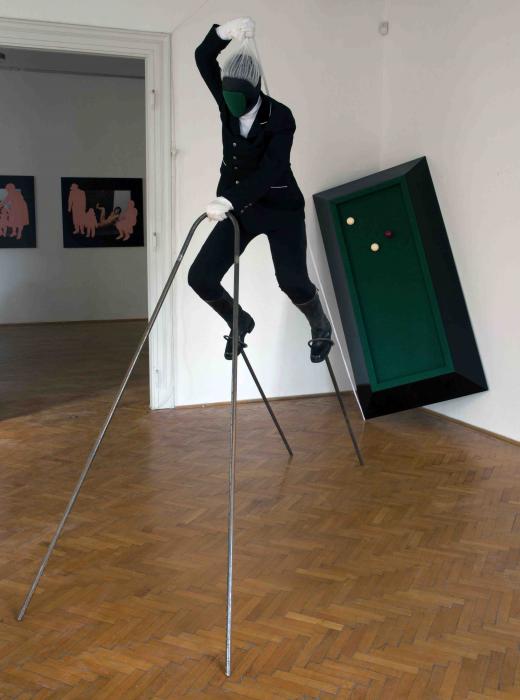 Dividing the self takes the form of casting, taking on and accepting roles or handing them out in the works of Marianne Csáky and Balázs Kicsiny presented in this exhibition. Coertion or choice, revealing the self or hiding it, finding one’s identity or concealing it – playing roles, choosing parts or choosing the people who will play the part, are a key motif in Csáky’s and Kicsiny’s work. It is a tool they employ and consciously, always adapting it to the theme they explore. It is their method to raise questions and investigate the issues in their focus at the time. Two markedly different voices resound in harmony in this joint exhibition, presenting models of behaviour, attitudes, roles and identities that enter into a dialogue at certain points.

A mother playing Madonna with the child in an archive family photo from the 1960s (Csáky: Time Leap – Madonna, 2008); or Munchausen, trying to escape from a timeless space but held back by his hair caught up by a billiard table, fixing him in the given space and in his momentary situation (Kicsiny: Anthem, 2013) are works where allegoric figures are appropriated or conjured up along with their connotations of their original cultural contexts, enriched by their current roles cast on them by the artists.

Kicsiny’s Munchausen as well as his parachutists having landed clumsily in a room, carrying food containers (Kicsiny: Temporary Resurrection, 2010) have been installed again and again in several parts of the world, from New York to Brussels, from Turku to Budapest, enriching their semantics each time in the local context, and bringing different layers of their complex meanings and references to the fore each time. Meanwhile, Csáky asks her Chinese fellow artists to re-enact, in 2010, scenes from an East European family video from the 1970s (Csáky: Delete, 2010), in her quest for those of the innumerable memories constructing our identity and self that may be understood and interpreted across cultures. By doing so, she also attempts to identify the point from which the elements of personal and small community are archetypal.

Casting roles is a determining concept in Balázs Kicsiny’s work. The players, the actors of his works are figures submitting themselves to socialization enforced on them, playing their parts in the exhibition space. Kicsiny interprets this space as a social field, where actors model various forms of behaviour, ranging from full identification with a role to desperate attempts to escape. The actors’ bodies are fully concealed by the costumes and props associated with their roles. Nevertheless, they attempt to play their roles in a space and time where their endeavours are doomed to failure from the very start …

A cultural nomad for a great many years now, having lived in a numerous locations from the Far East to Western Europe, Csáky chooses roles, observes and also casts parts on others. In some of her works she reenacts roles, scenes and situations, while in other pieces she makes others reenact them. The silhouette of today’s figure (her present self) reintroduced into a scene of the past cuts across the dimension of time, while the Far-Eastern artists reenacting Eastern European roles, bridge situations across time and space, both expanding and enriching images of the memory, images that are bricks and mortars of our present self, interpreting them in new contexts each time. Simultaneously, she explores and identifies the elements defining our identities, tracing them back to archetypes in the contexts of various locations (In the ongoing Local Everywhere project she began in 2009).