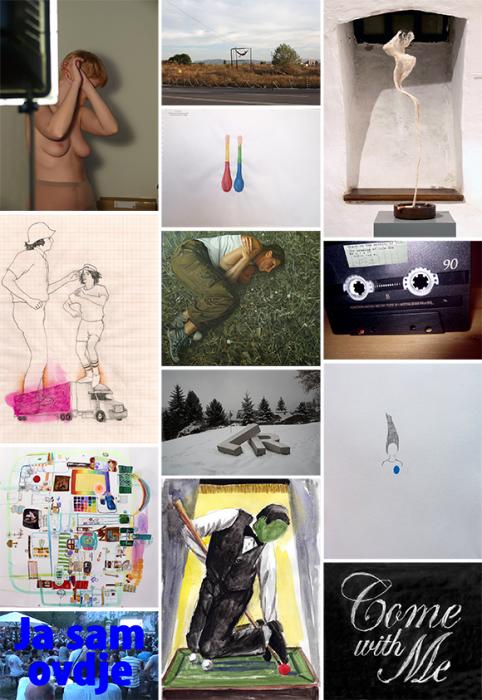 The structure and spaces of contemporary art realign, and in this dynamics the artists, as protagonists follow new strategies, the different environment makes them reconsider their role, just like the other participants of the scene. The mythical significance of art has vanished, the work of those working in arts has become a natural part of information exchange and triviality, although it remains separated, and just like on other fields of culture, it has an almost fixed audience. What should we do, how can we contribute, and how can we define ourselves in the midst of such changes?

The compulsory exoteric aesthetics has disappeared, and thus, art has become harder to grasp, and the freedom of “any form” makes it almost impossible to make a generally acknowledged definition of contemporary art, its description, and the determination of individual works seems to be the mutual agreement of the inner circles.

At the same time, fine art exists as an everyday activity, and the artists work. Ever since the Renaissance, artists have brought into focus, time and time again, their own activities and self-definitions, as if remaining inside this magical circle, and communicating through its means.

Are artists more interesting if they take a stand on current issues, express themselves simply, communicate mundane matters in a banal, albeit emphasized manner, or do they rivet more attention if they talk in symbols, and create impenetrable, awe-inspiring, “beautifully ambiguous and mysterious” works of art?

The Inda Gallery attempts to present what occupies our artists these days, what their status report is about themselves and the circle they live in. Their form and technique of expression are also indicative of their journey.

In an unusual fashion, Márta Czene show us her photos this time, evoking the still-life of the Baroque in these pictures of waste and everyday food, particularly the polysemous raw meat.

Marianne Csáky, who has been living abroad for many years, expresses the conflicting emotions of wanderlust and home-sickness through her photos, where gigantic, sculpture-like initials depict the unseen, missing people, her family members; in the wintertime, still homely garden of her mother.

Lajos Csontó uses an ambitious symbolism in his work titled 'Lonely Planet', where the micro- and macrocosmically interpreted infinite loneliness is expressed in a glass painting in the shape of a vinyl record from the Golden Era of Hollywood.

In the art of Róza El-Hassan, social responsibility is of central importance. A selection of her latest drawings is exhibited, created with sensitive symbolism, minimal tools, and expressing the unhealing wounds of the endless Syrian situation, showing the map of the country in red, and the flowers of grief, the jasmine.

Judit Fischer continues to introduce the viewer to the excitingly varying world of bric-a-brac, knick-knacks, and relics. She paints the methodically gathered and gained little objects with water-colour, and carefully arranges them in groups. Her newest collection is exhibited here.

The feeling of needlessness is embodied in György Jovián's dramatic paintings of homeless people, after the series of pictures of soil, wrecking, waste, fallen branches in the forest depicting life and lifelessness at the same time, this picture contrasts the prolific, living nature, the green field with the hopelessly lying body. The nearly life-sized “portrait” flabbergasts the viewers with its size as well.

The billiard-table of the earlier installation titled 'Anthem' by Balázs Kicsiny bears the symbolism of a closed space governed by rules and luck, and this time it appears in the form of water-colours. The player enters the play area in an enigmatic way, physically participates in the game that, until now, was interpreted from the outside and controlled from a cue's length.

Endre Koronczi shows the opposite of this, as an artist, during his “journeys”, he observes processes and events that might as well be about him, yet happen without his active participation.

Judit Navratil's water-colour “Somorjai 23” is also a self-documenting work, and it examines the concept of home in her typical child-drawing style, which seems decorative only at first sight, in reality, it is actually a profound environment-casework of the artist's life space.

András Ravasz's photograph of an analogue cassette tape, represents the objective, and at the same time, subjective relationship between the artist and music, the analysis of his own past, when he applies in small, barely noticeable letters his comment, “Teach me the meaning of life. The meaning of life is: 4 w + 3 = 11 Solve for w.”

Kamen Stoyanov's project 'Szinkronizáció' (Synchronization) is similarly self-analytical and self-ironic. A hammock is set up on an abandoned advertisement grid by a motorway, on a no man's land near Sofia, Bulgaria, as if advertising the peripheral nature of contemporary art, and the constant, conditional state of the artist.

In Ádám Szabó's sculptures (Volcano, Field, Love, Factory - Vulkán, Pálya, Szerelem, Gyár) “the peculiar encounter of materials is common: stone and fleece, tin and wire, wood and fleece, iron and fleece. One is hard, with sharp contours and shapes, while the other is more blurry and evanescent. Thus, one suggests firmness, finiteness and endurance, while the other bears a kind of elusiveness, momentariness and melancholy.” Beside the constant presence of humour, the important experience of the past is that apart from the earlier, rather theoretical, conceptual attitudes emotions and moods are becoming more and more emphasized in the artworks. I have been interested by the problem of time for quite a while, starting from the documentation of the sculpting process... Smoke appears, as permanency and inconstancy at the same time, and its meaning is always different, as seen from its adjectives and imagery.[1]

The interactive work 'How far is Makó from Jerusalem?' (Milyen messze van Makó Jeruzsálemtől?) by Zsófia Szemző “gathers and analyses the real or imagined distances from Budapest based on the information given by the visitors. The spatial perception influenced by subjective factors (such as individual methods, local knowledge, the socially defined map of 'dangerous places' and others, spaces connected to certain groups and sub-cultures) and the objective distances measured in time and kilometres can vastly differ from each other.” (Judit Csatlós)