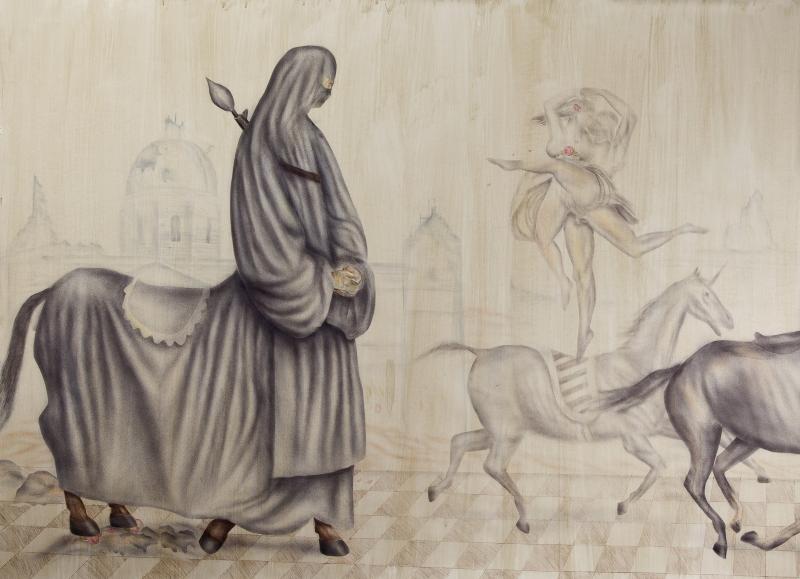 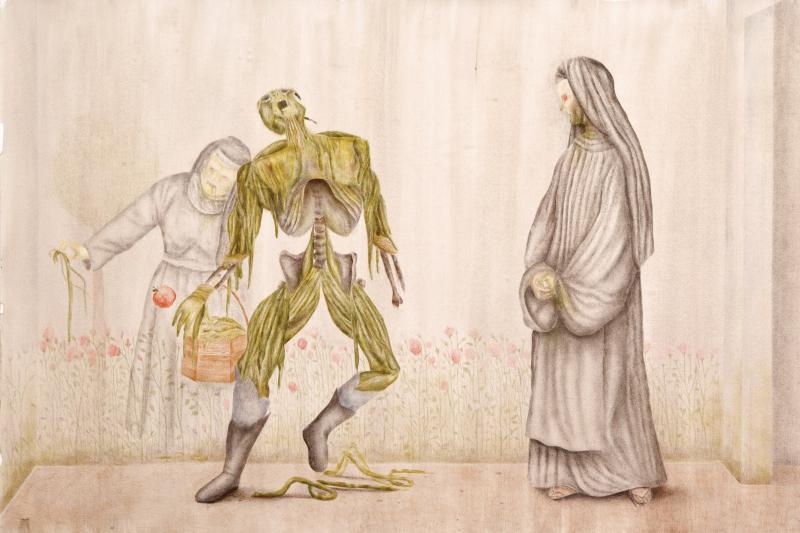 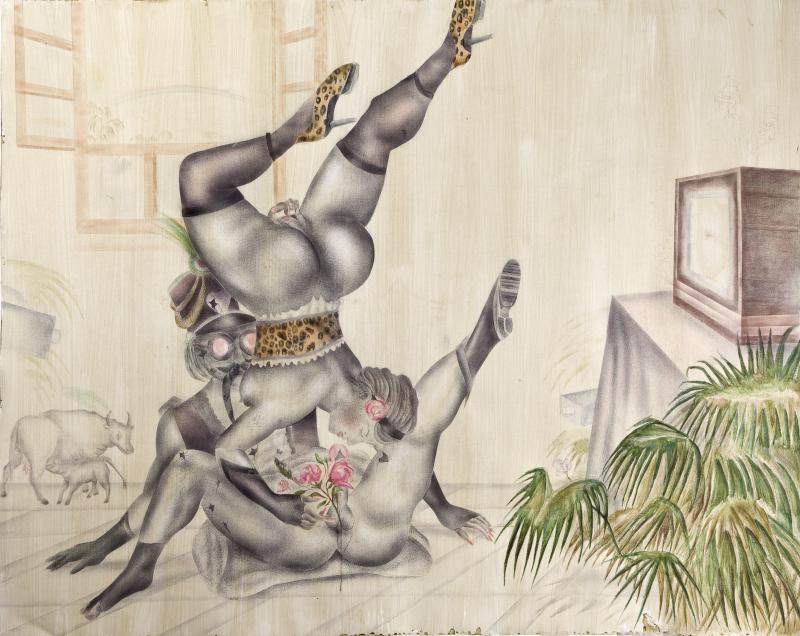 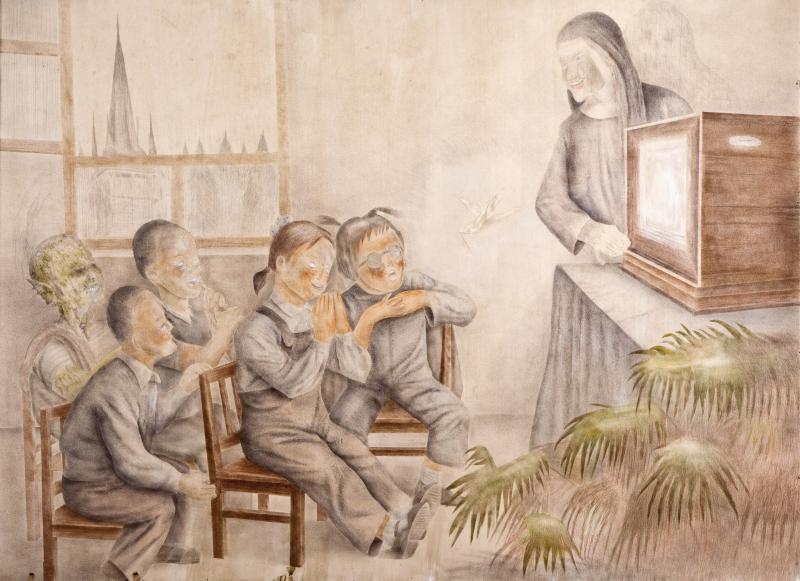 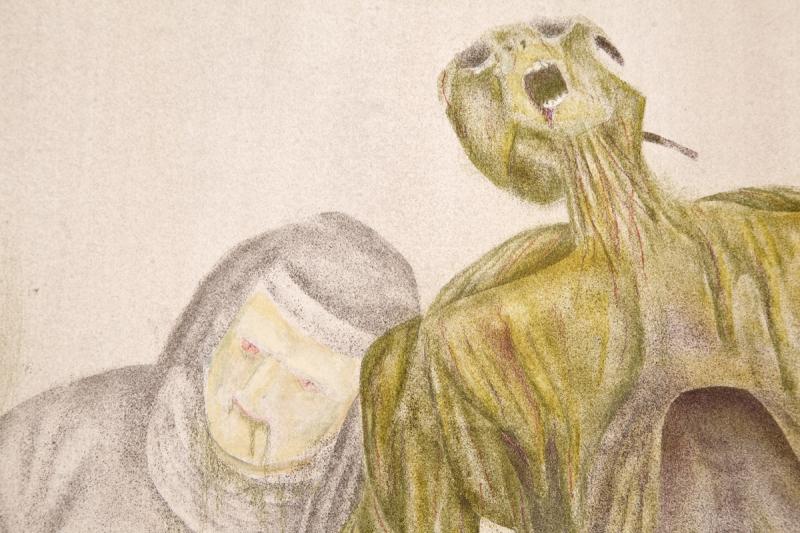 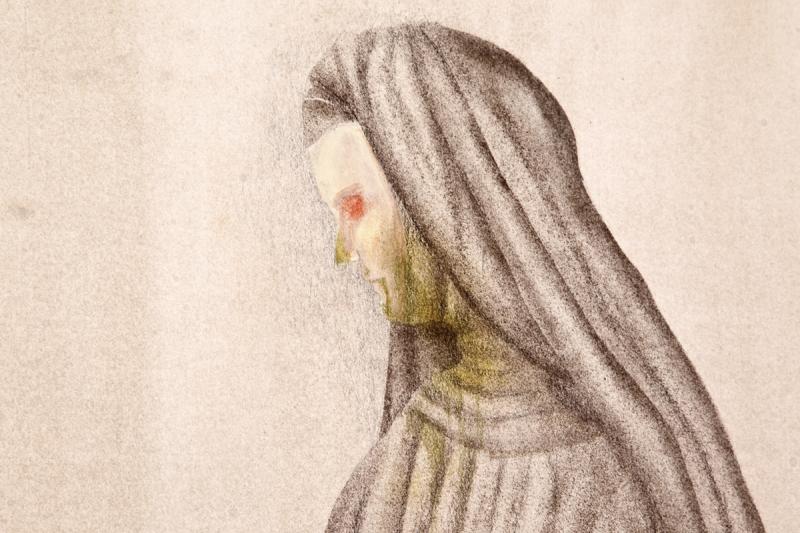 “I discovered the Art Colony of Nagybánya, as a phenomenon, before my state exam, when I was working on this thesis. My 'physical' pains soon disappeared as I was studying the theses. The paintings of Béla Iványi-Grünwald and Oszkár Glatz caught my imagination visually, and reminded me of the six months I sent near Nagybánya in Máramaros when I was a child. The invariable, typical haystacks of Erdély (not the machine-made bales), the gloom of the abandoned, dark brown wooden churches, the village funerals, the atmosphere of fairs, and the folk motifs can be found in some of my works. The atmospheric landscapes of Glatz evoke the paddocks and forests of Nagybánya and Kapnikbánya, where we often went to pick mushroom with my family. The 'horrorism' starts to fade from my latest works, and instead they follow an elegantly romantic direction. The tell-tale titles remain, however, but the focus shifts from narrativism to visuality, naturalism and plein air.” (Stewe von Horrible aka István Máriás)

Horror is a genre whose audience knows that the experiences are unreal, everything is fiction, but the designated victim looses and has absolutely no chance to escape. Happy end is almost impossible in this genre, the purpose of the entertainment is not escape, nor the exposure of the culprit, like in the classical thrillers, but the artistic evocation of fear, the increase of terror to extreme degrees, and to act out our atavistic instincts in our fantasy. Is Stewe von Horror content with this single meaning? I doubt so. By having changed his name, Stewe von Horror indicated his affinity for this genre without limiting himself to the above-mentioned definition. His formidable images express the anxiety caused by the uncertainty of today's social environment, and he uses a unique, but easily decipherable symbolism. His earlier works were based on the ambivalent universe of fairy tales that made no difference between beauty and cruelty, which differ from horror in having a moral and a soothing, cathartic conclusion. Stewe von Horror's moralizing, narrative, surreal, irrational world presented the colourful figures of dreamland, the heroic episodes of our national history along with a distinctively Central European artwork and American pop culture. His fabular cultural metaphors and narrative tableaux are replaced by an adult fantasy that blurs the line between reality and imagination, and bears the stylistic marks of an instinctive roman noir, thus the artist gets closer to the present in place and time, and he does not shy away from the topics of taboo, such as religion and pornography. Today's customary visual commercial elements, e.g. the beautiful women and the poster-like visual construction are missing from his pictures; the artist takes beautiful details from the past – the bodies that are full of life but already have the colour of decay, the flowers and the ripe fruits all perform the same memento mori role than the classical “natura morta” paintings. But what does the above-mentioned Art Colony of Nagybánya have to do with this world? According to Stewe von Horror's brief interpretation, this national painting school is characterized by the evocation, the importance of art as a new element, its “healing” effect that brings oblivion, increased by the historical elevation of the heroic era. Stewe von Horror plays with this idea, sets the quiet, comforting scenery, the pathos of the countryside that is only idyllic from a safe distance against its real content and vice versa, with transpositions that challenge the audience once again.