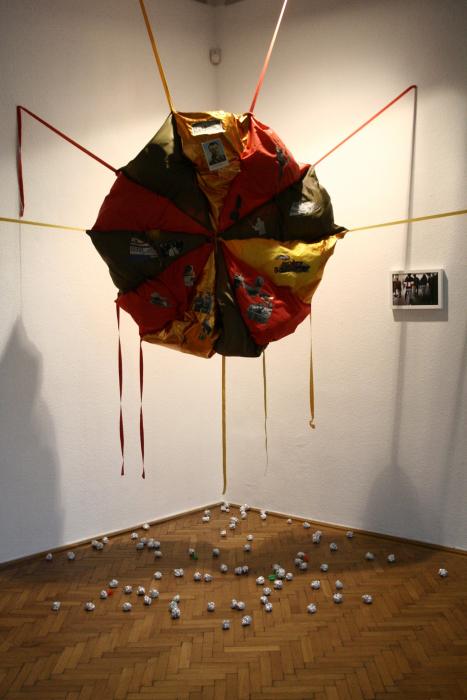 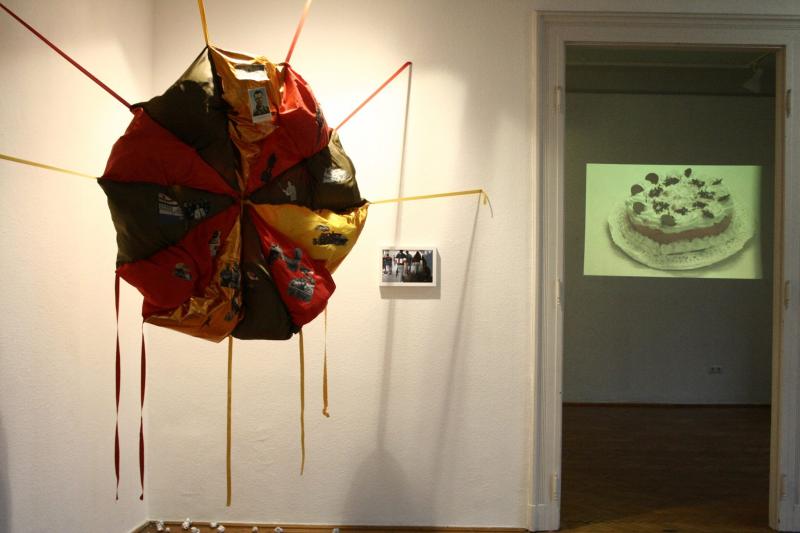 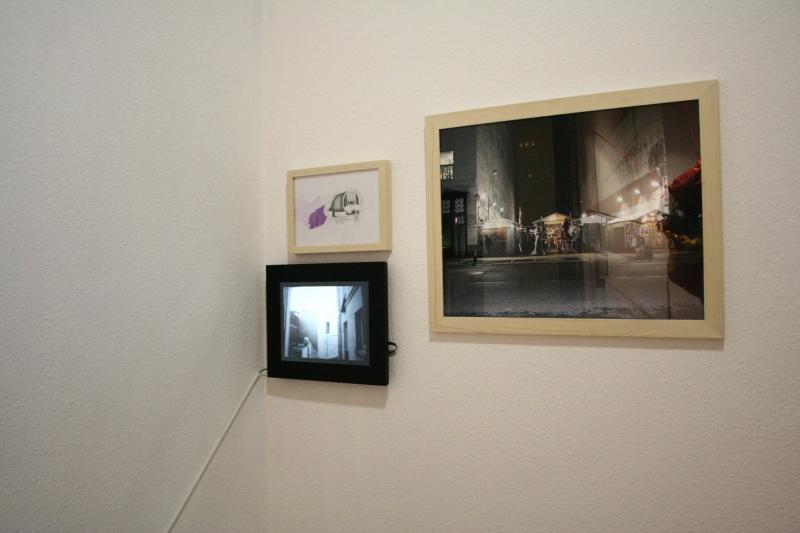 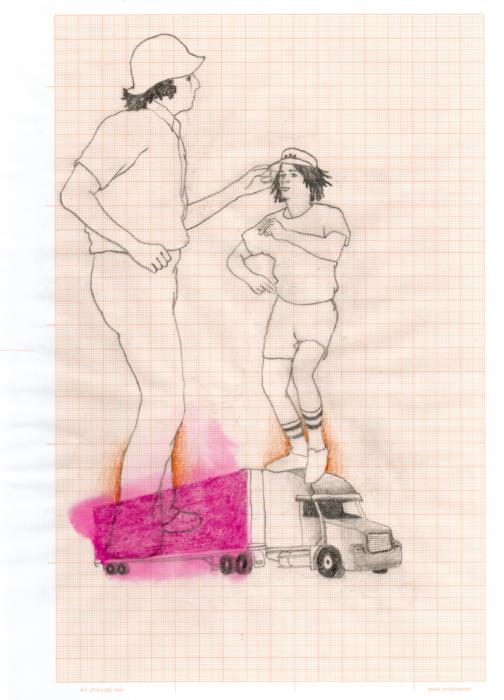 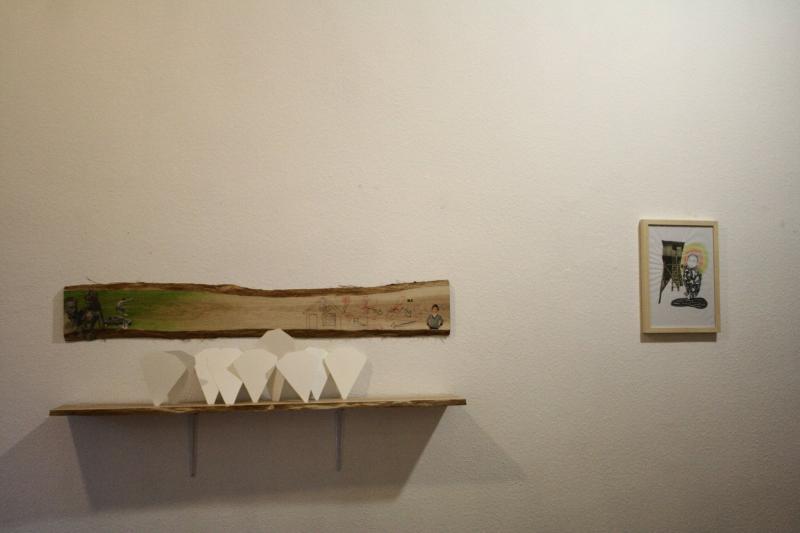 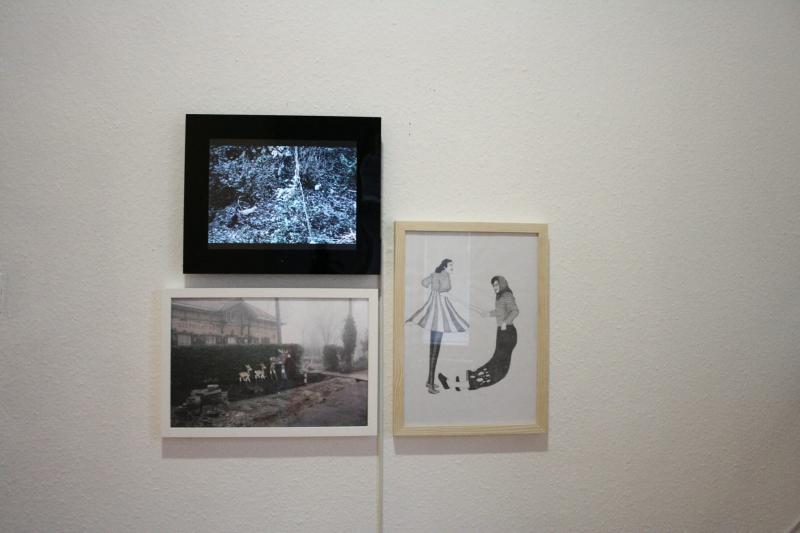 Zsófia Szemző tackles the current social, economical, global and ecological issues of reality, and often expresses them in the form of evanescent or location-specific installations using drawings, photographs and texts; and she also thinks beyond reality, in associations that produces surrealistic drawings. Sometimes, the versatile creator focuses on general existential questions and approaches her own identity from the aspect of humanity, and sometimes she places these issues in a wider context.

The exhibition in the Inda Gallery is divided into three themes: Forgetting the Continents; Everybody Wins!; and Not a Stone Left Standing – Colour to Colour, Number to Number.

The artist revisits the European discoveries of the Renaissance era. She criticizes the fact that instead of gaining knowledge, the Europeans used to consider the newly discovered, albeit advanced cultures backward and in need of change. When Africa, America or Polynesia were discovered, the conquerors tried to re-shape the culture of the original inhabitants in their European image, from beliefs to lifestyle, often using the most violent methods imaginable. During the period of colonization the map of the entire world was re-drawn and several native peoples were subjugated or extirpated. The great catastrophes can only devastate the surface of Earth, while the so-called 'civilized' people became powerful by enslaving the cultures they deemed 'barbarian'. Humanity have been exploiting and exhausting the basic natural resources of the planet every since.

Following a recognition, humanity should change its ways to ecological agriculture, minimal consumption, recycling, the encouragement of sustainable advancement, and birth control. As the tools of communication became wide-spread, useful information is easy to access and defines humans' attitude towards the world on a global scale. However, our desire for a life of quality has not yet replaced the quantitative progress. Humanity still wants more and bigger of everything. The continuous striving for economical progress increases consumption exponentially, while the alternative minimal solutions stay in the background, disregarded. The accumulation of knowledge and its quick accessibility have not started to change the general thinking, consumer habits and the increase of waste as quickly as expected.

If we could change our habits, give up traditional ideas and use science in innovative ways, we would be able to attain sustainability, says Zsófia Szemző, if we used energy consciously in its natural form, e.g., solar collectors or thermal energy. The energy evolved during the change of physical state could be used according to the existing circumstances in the location, or we could create alternative lifeforms utilizing the cyclicism of nature.

Zsófia Szemző's mentality is somewhat similar to the humanistic, beneficially moralizing group of Japanese animated films that use surrealistic and powerful visual effects to convey militant ideas to save the Earth, but her imagery is completely different with a unique and distinctive style. Her pictures are also influenced by the collage-like construction and beyond-reality methods of Endre Bálint, one of the most influential Hungarian artists, emphasizing that recently, in contemporary fine art this image pattern has become the most timely formula of expression.

The powerfully associative, speculative elements of the exhibition are represented intertwined, reinforcing each other, leaving enough space for the individual interpretations of the visitors.