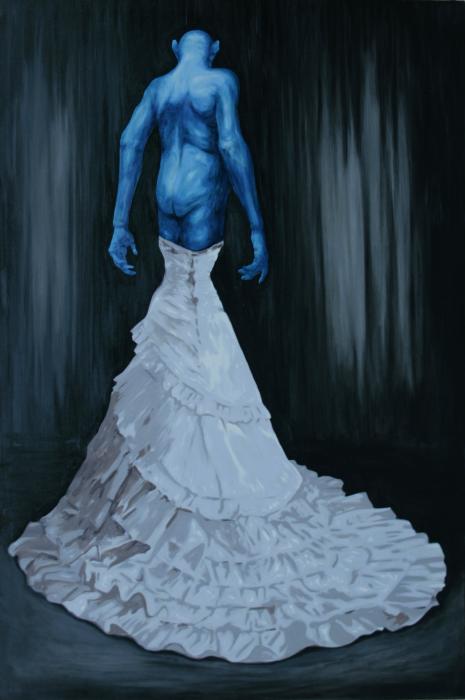 Max Ernst's collage novel La femme 100 têtes (The Hundred headless woman) was published in 1,000 copies in 1929 in Paris. André Breton wrote the introduction for the book that contained Ernst's own fictional stories illustrated by wood engravings, cut-outs from magazines, and encyclopaedia illustrations.

Surrealism shocked the world with its mysticism, eroticism, critical and humorous tone, its defiance of Catholic dogma, and last but not least, its chaotic visual associations and new techniques (collage, frottage, etc.).

The previous works of Zsolt Ferenczy have had the pieces of classical surrealism as their source of inspiration, but this time there is a parallel between Max Ernst's above-mentioned work and the current exhibition.

Hinterland does not merely rebel against contemporary art by offering an alternative solution instead of aesthetics, it also incorporates a real archeological finding (a sixth-century skull) with sarcastic humour, which confuses the audience just like Max Ernst's encyclopaedia illustrations that appeared side by side with the fictional and pseudo-scientific engravings in the book.

He presents the eternal, infinitely sentimental symbols of love and beauty, the rose petals in a frozen state: they melt slowly in a glass aquarium, then quickly fade away. The flowers are from Ferenczy's own garden, they have been collected and preserved since last spring.

The story is about a prehistoric human who wakes up in our time, falls in love, and attempts to adjust to the stereotypes of marriage. The paintings preserve the moment when this apelike creature from the past tries to put on the snow-white wedding dress that had become smaller and smaller throughout time. This trivial moment contains the criticism of the stories of origin flooding from Hollywood (revived dinosaurs, cloning attempts, anthropomorph extraterrestrials) as well as the irony of our stereotypes of beauty and our need for romance.

The title of the exhibition, Hinterland (Hátország), is yet another sarcastic reference to the ambivalent meaning of home and present-day migration in every possible form, that redefined the meaning of motherland and strengthened wanderlust, the coninuous search for the ancestors and our origin since colonialism.