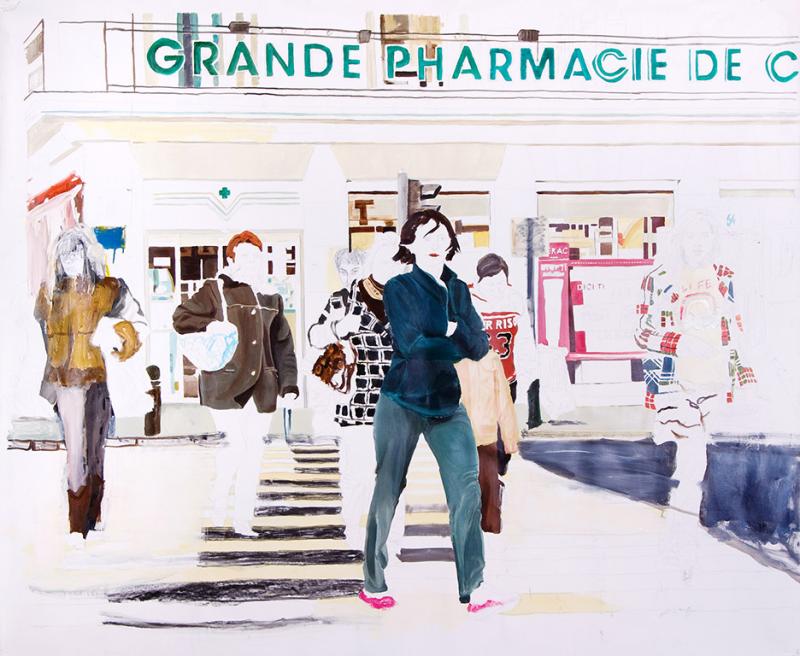 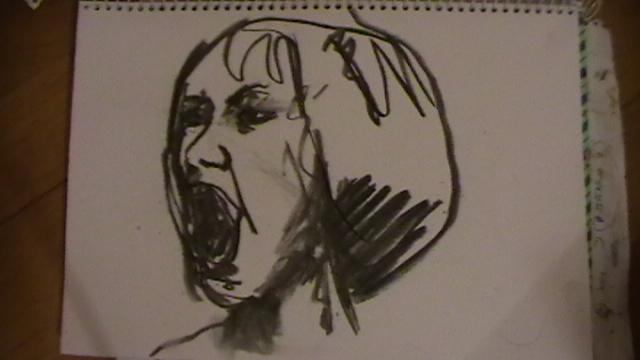 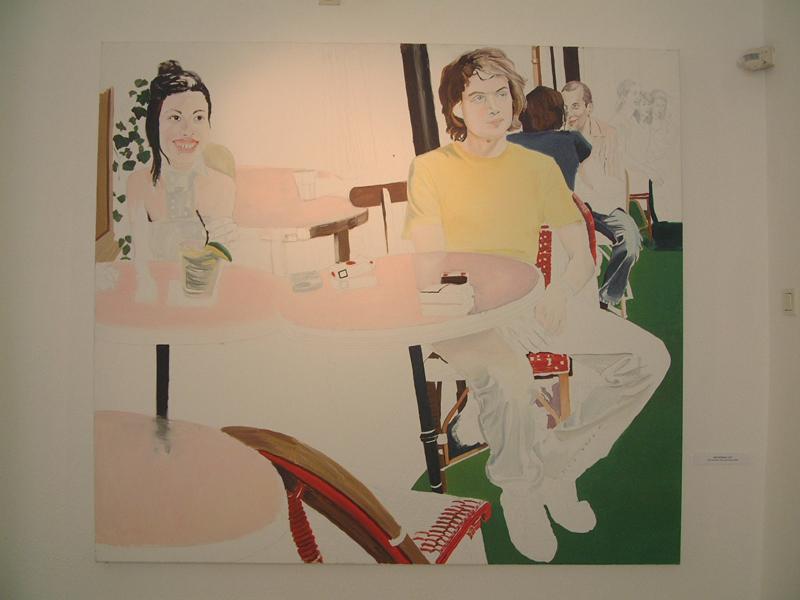 Who is observing who and how? Does the artist observe the the man in the street? Is it us, the audience observing the works? Does the painter observe the audience? Indeed, everything happens simultaneously on the canvas. The painter choses her theme – in this case it is the surrounding crowd, the street, the zone of the dynamics and action of life. This is the place where we obtain our first impressions of a city, an event, the locals and their guests – we draw conclusions of the direction of the swarming crowd, we watch and listen to each other. Here we receive our first, quick fragments of information of trends and fashion on every level, in every field, which we wish to conform to or surpass. We observe the gestures, interpret the movements, who belongs to who, and we eavesdrop. The behaviour and the postures convey much deeper information, we can sense the tension and mood swings beneath the surface. It is a challenge for the painter to depict all of it on a single motionless picture.

The works of Kim Corbisier have proven to be successful experiments not only in reaching this goal, but also in the current renewing tendencies of painting – she has developed a unique style, significant beyond the application of traditional techniques. The empty patches of the canvas, the rough and purposeful colours and drawings express today's fast and dynamic rhythm of life, the shortening of reaction time in every field as well as the diversity and continuity of comminucation. Her works are actually portraits, we can see human forms and faces that communicate with the audience: they may peer out of the picture or turn their backs on us. We can observe relations, solitude and lifestyles within a matter of seconds. Although the labels are not in Hungarian, we can still feel that the street is the same everywhere, our space of communication also remains the same regardless of culture or geographical position – this is where we all live, display our faces and postures, show ourselves. Thus, we all become part of a texture, and on its surface we immediately connect with our environment.

Kim Corbisier doesn't chose her characters at random – she observes and collects her material, then choses the themes that she is most interested in. On her urban tableaux she often depicts the workers of the street, and the family men carrying shopping bags. She uses her recurrent topic for extricating herself from her childhood traumas: the child, being in the protection of an adult, looks out at the artist or the audience. She often places herself into the rushing crowd as a point of rest, thus following an artistic attitude rooted in the Renaissance, e.g. Raphael's face peering out of La Disputa.

Her paintings point beyond the initial, simple imaging, towards the association of ideas supported by a montage technique, and the pictures are developed by the juxtaposition of scenes from several photos. Movement is reinforced by the extremely precise colour dynamics, as well as by the white and tinged surfaces, and the ratio of pictorial, elaborated and vehemently applied blobs.

Method and outcome are in fruitful connection with and bear closely upon Kim Corbisier's varied film-making works. Being an active actress, sometimes she works as a scenery painter or director of her own film. She participates in many works, from feature films (György Pálfi's I Am Not Your Friend) to experimental films.

We are looking forward to see her recent initiatives in the field of performing arts.