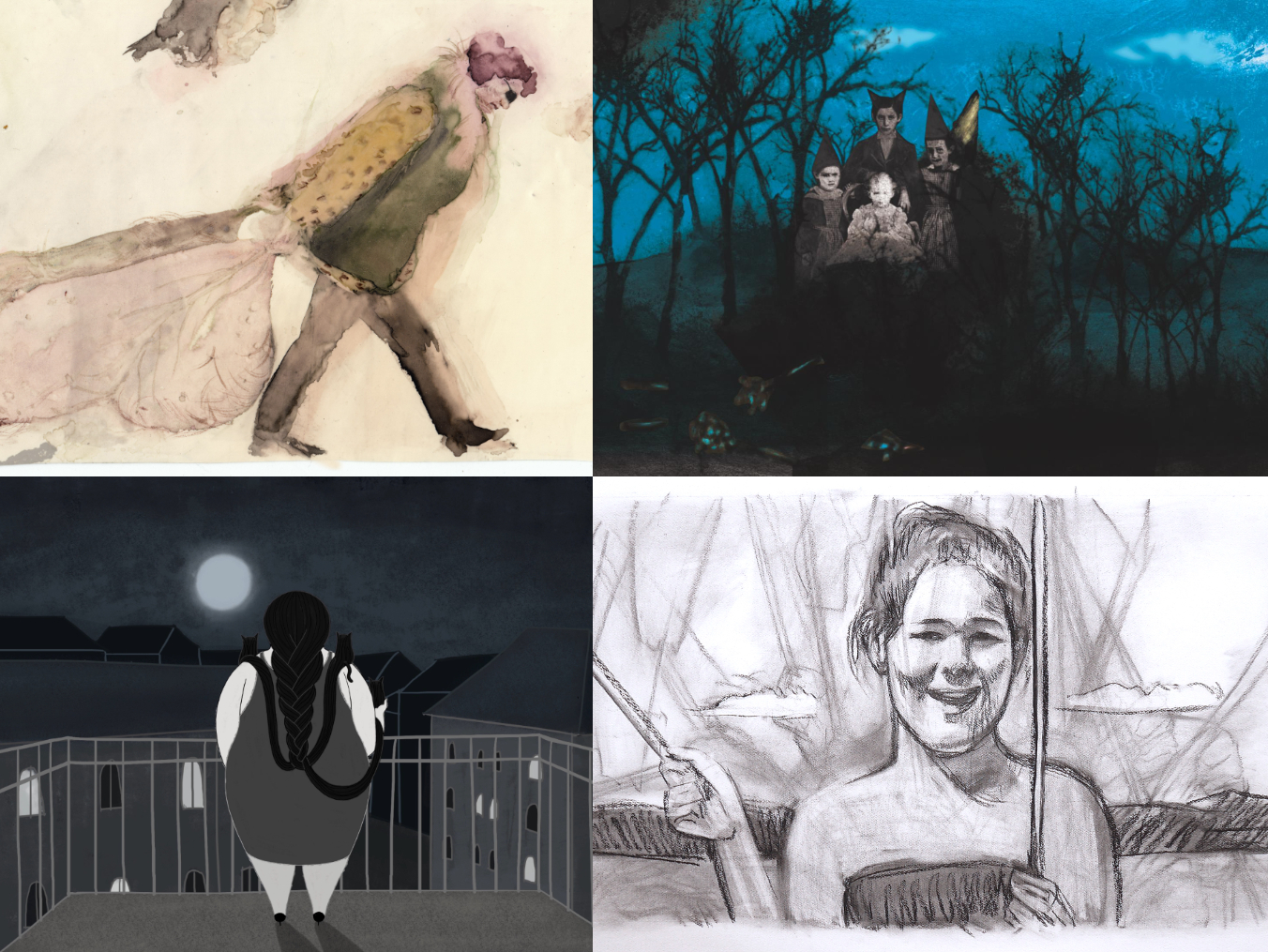 In works by four women artists (Éva Magyarósi, Eszter Szabó, Ágnes von Uray-Szépfalvi, Judit Wunder) the show presents animations and still images (drawings, paintings) on which the animations are based, and which, at the same time also exist as self-standing works. The project endeavours to explore the difference between the still and the moving image, or more precisely, how the meaning of the image changes if it is presented as a still or as a frame from an animation, and how the meaning expands when the two are shown side by side. The other focus of the selection is the female gaze, which essentially defines these artists’ stills and animations, yet, in different ways.

Traditional female characters, from little girls to adults, appear in Ágnes Uray-Szépfalvi’s work, based on a children’s song by Béla Bartók. Of the four artists in the exhibition, Uray-Szépfalvi is the one who approaches female roles in an essentialist manner – similarly, in a way, to Bartók, she interprets them in their relation to tradition.

A major group of works deals with personal relationships. Éva Magyarósi’s animation titled Briefly about Us is an account of a couple’s relationship in the form of drawing with a monologue, and so is Abandoning the Testicles by Eszter Szabó, the winner of this year’s Leopold Bloom Award. Judit Wunder investigates the question of solitude, living without a partner: The main character of her animation titled Bond is a young woman who lives isolated in her home, yearning for love. The protagonists in Eszter Szabó’s works are tired women, wandering around, carrying their burdens (literally as well as metaphorically).

The other large group of works presents archaic worlds, such as Paradise, which is reconquered in Eszter Szabó’s animation, or a magical relationship of humans and nature in Éva Magyarósi’s enigmatic and surrealistic Tundra. Magyarósi explores the connection between the human body, other living creatures and the cosmos – in search of the harmony that unites us with nature and the universe. Her Invisible Drawings is about personal memory, its subjective nature and focuses. In various media, she recalls memories of her family, mostly of her father.

Uray-Szépfalvi and Szabó adopt a special approach to the genre of portraiture in their animated portraits (Uray-Szépfalvi) and the animation called Facelift (Szabó). In their works, the image moves only to the extent of a few repeated motions, while Wunder’s and Magyarósi’s animations are longer, mysterious, balladistic narratives.

The oeuvres of these four artists are fine examples of the differences between the meanings of still and moving images. The exhibition reveals how presenting them together enriches those meanings.