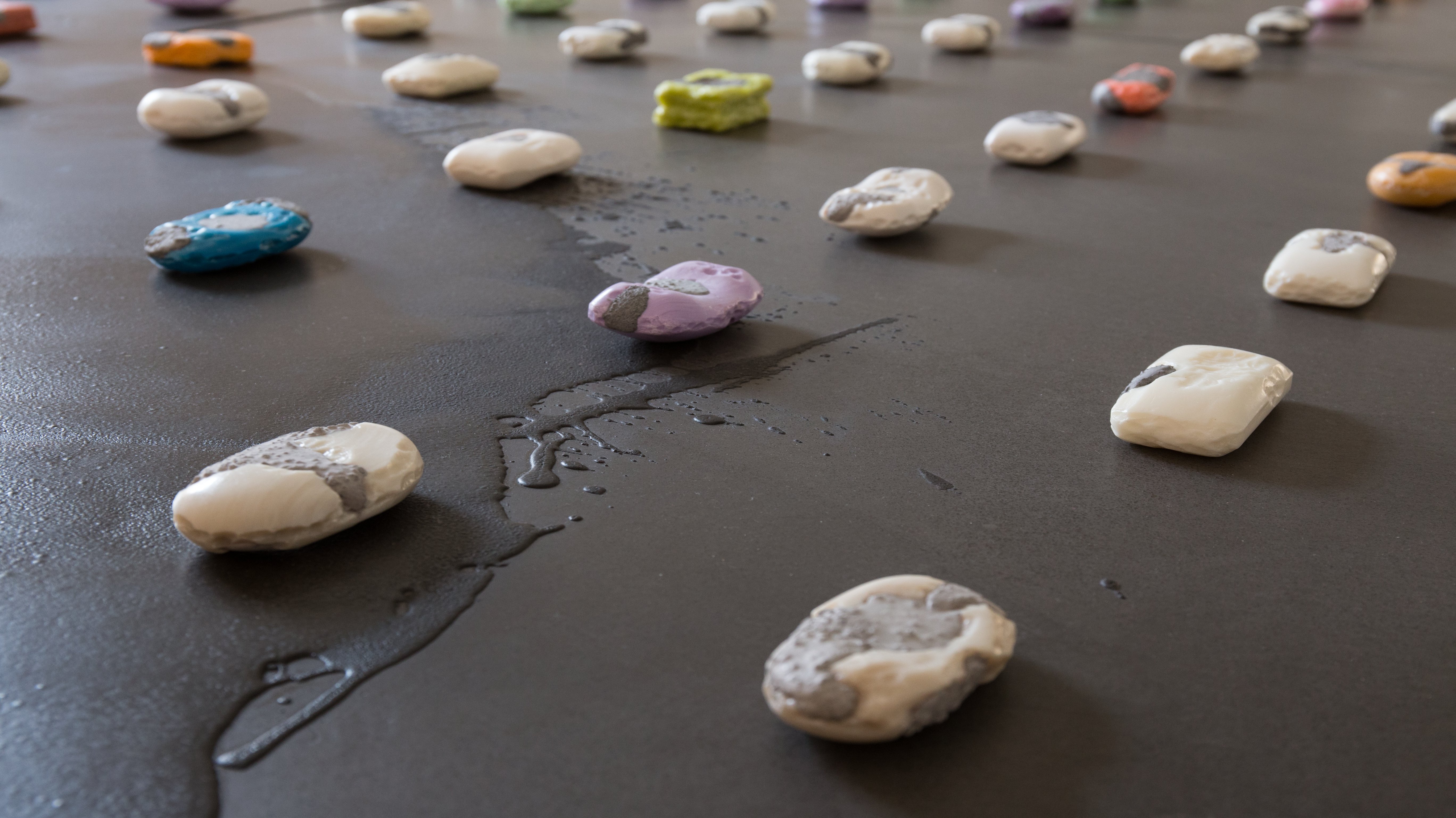 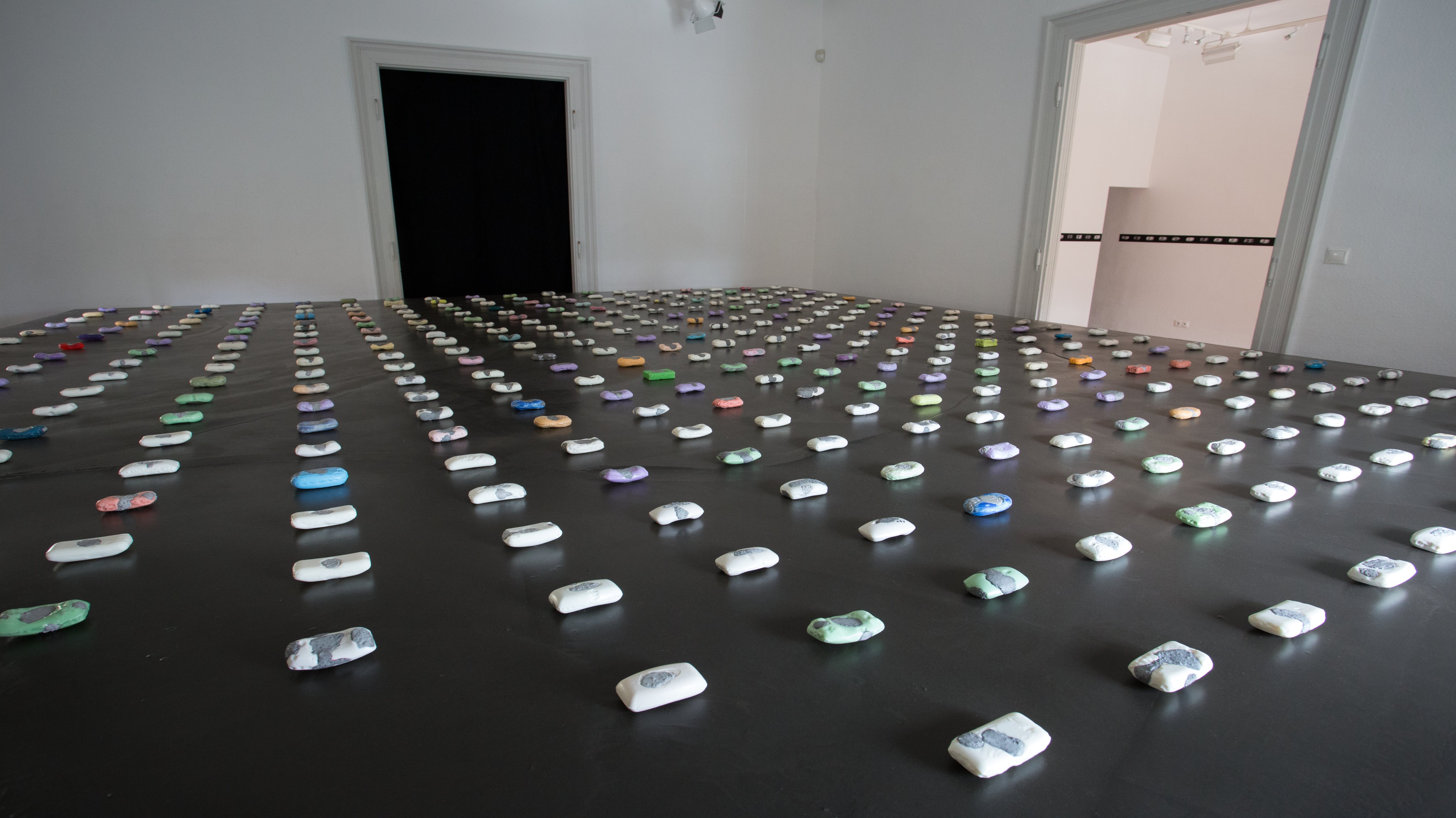 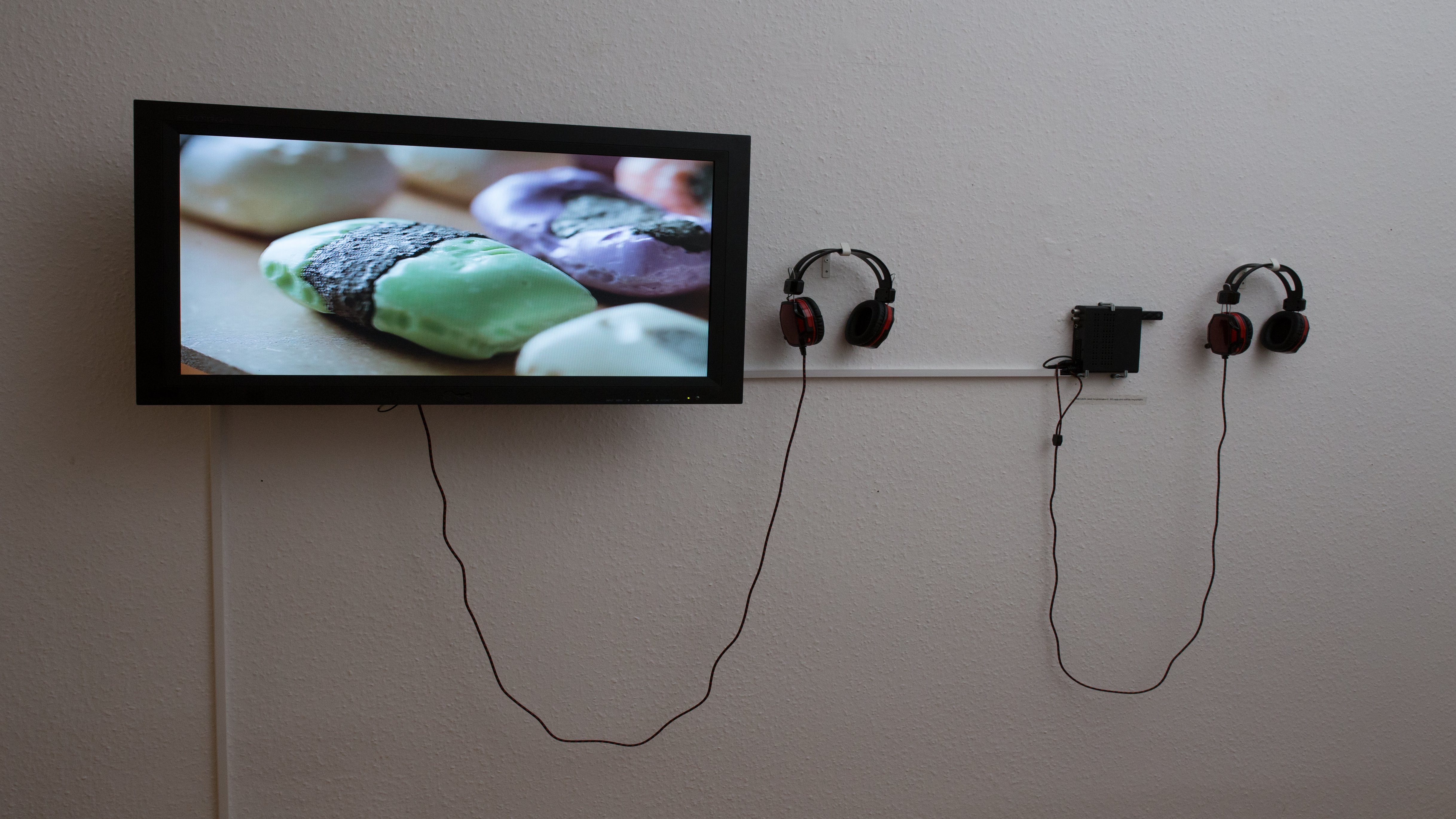 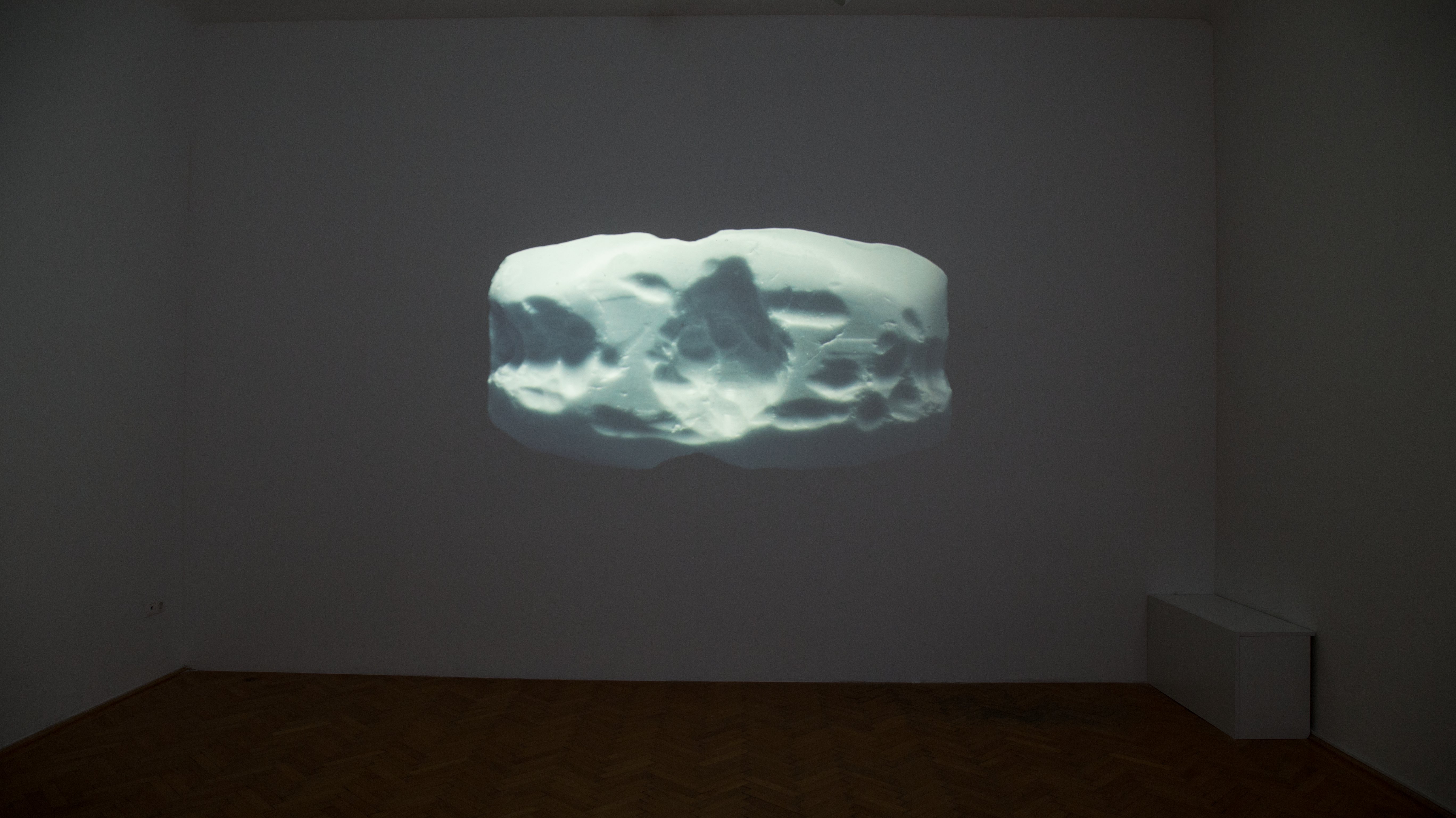 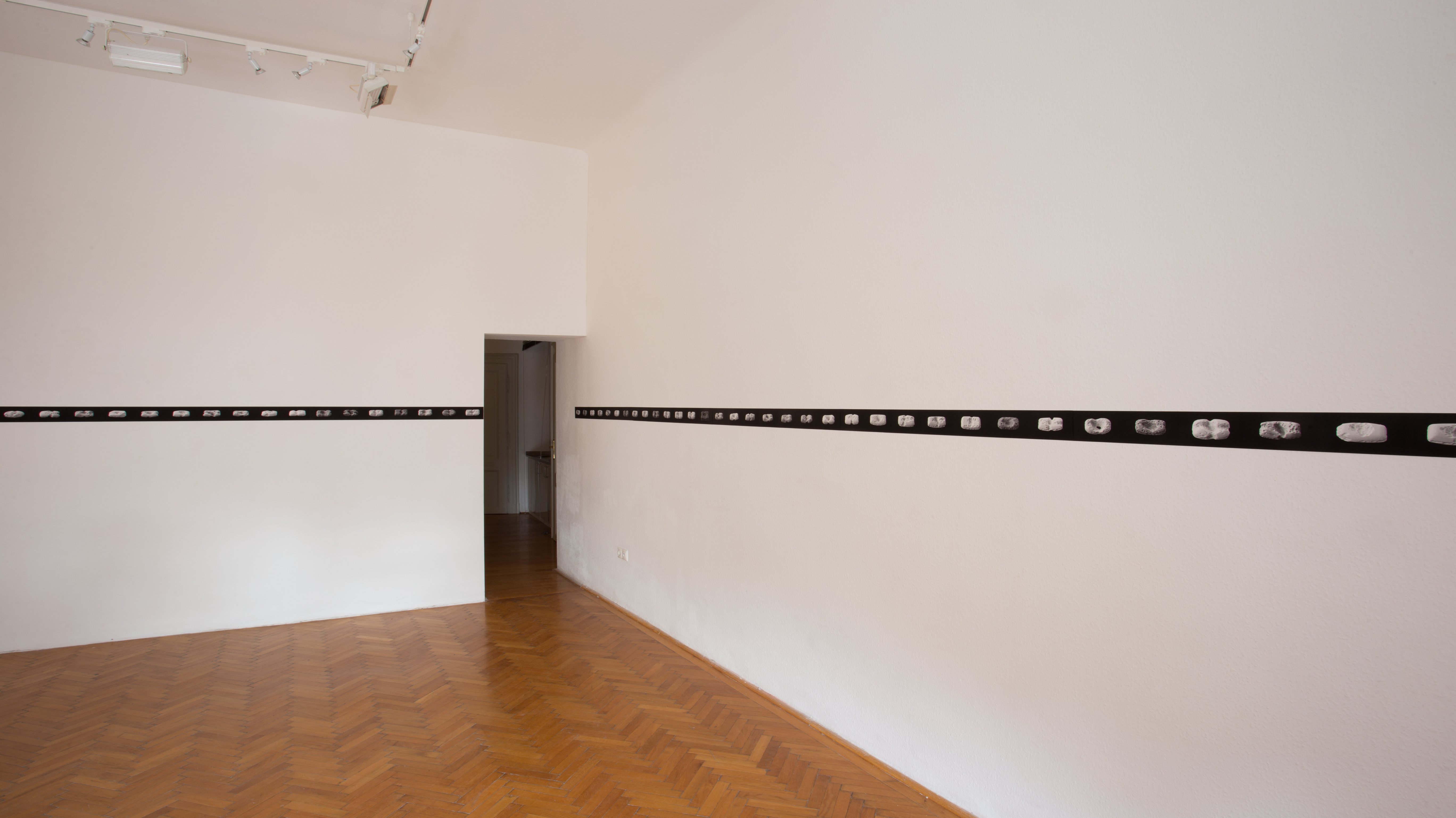 Ágnes Eperjesi’s work is based on over 300 coloured soap bars, carved by hand. She received the soaps from her friends, the parents of an autistic young man, named Dávid. For many years now, day after day, Dávid has carved an intense-scent soap bar with his fingernails – and the products of his hard daily labour have become the basis of the installation.

Autism affects one in every 100 people on Earth. The condition of autism, however, is not necessarily only a disadvantage. It often co-occurs with an original way of thinking, special abilities and talents. Meanwhile, what people with disabilities rarely experience is that their activities different from what is considered ‘normal’ may be interpreted by others as a special form of abstraction, as artistic production.

In her most recent project, Eperjesi works with the soaps in several ways. First, she takes object photos of the soaps. The strong abstracting effect of the black and white photos transubstantiates the cream-coloured objects. In the second phase, Eperjesi completes the carved soap bars – restoring them to their original shape, the one they took when they were moulded in the factory. She uses concrete to fill the carves, which is in sharp contrast with the soft and frail material of the soap, using these objects as the medium to express her ideas about the relationship of people living with disabilities and those who are said to be healthy.

It usually takes hard work for people living with autism to realise their talents, and experts’ help is essential in that process. The earlier the condition of autism is diagnosed, the higher the chance to reach the goals in assisting an autistic person. Ágnes Eperjesi and INDA Gallery, representing the artist in Hungary, in partnership with Eötvös Loránd University’s Bárczi Gusztáv Faculty of Special Education, will hold a fundraising campaign during the time of the exhibition to support the SHAKES research and development project, aimed at improving the quality of life and social inclusion of people living with autism.

In The Time of Autism fundraising programme, Ágnes Eperjesi and INDA Gallery offer all those donating over HUF 100,000 a photo of the artist’s series, which is part of the 365 days of D project. Donations can also be made in person at the gallery, from the opening event on September 6, 2017, and onwards.

The artist and the gallery thank Dávid Vedres and his parents, Edit Orsós and Csaba Vedres.